If you or a loved one has been injured and you believe you may have a legal claim, please contact us at (877) 515-7955 or fill out our free case evaluation form.

We have done extensive research on child car seat and booster seat safety, design, and regulation. As a result, we have published several papers, and we have been interviewed by national and local media outlets, including Bloomberg and News4Jax. Furthermore, we have traveled across the country, investigating claims, taking depositions, and uncovering  hidden truths behind booster seat companies, and how - in an effort to increase their profits - are needlessly putting children at risk by marketing their booster seats against the best practice safety recommendations of the National Highway Traffic Safety Administration (NHTSA),  the American Academy of Pediatrics (AAP), the Governors Highway Safety Association (GHSA), and many state laws.

In Florida, we successfully led the charge to lobby the Florida legislature, resulting in passage of SB 518, a state law requiring children under age five to be secured in federally-approved child-restraint devices.

Our Child Car and Booster Seat Team is led by  Theodore J. Leopold, a nationally renowned trial lawyer, who has tried to verdict multimillion-dollar jury trials throughout the United States, including a $131 million jury verdict against the Ford Motor Company – the ninth largest verdict against a U.S. automobile company (Cole v. Ford);  Leslie M. Kroeger, a highly respected trial lawyer, who has been at the forefront of our firm's booster seat lobbying efforts. In 2015, Ms. Kroeger was awarded the Champion of Consumer Safety Award by the Florida Justice Association, and she was one of three finalists for the Professional Women in Advocacy Excellence in Advocacy Award for her lobbying efforts before the Florida legislature, resulting in passage of SB 518. She serves on the Board of Directors of Guardians for New Futures and is the driving force behind a Safe Kids bi-annual booster-seat give-away.

What is a Child booster seat?

A "booster seat" is a seat used to elevate a child so that a vehicle's integrated lap and shoulder belt will fit a child more appropriately. A booster seat is considered the last step prior to transitioning a child into adult lap and shoulder belt use. Prior to being placed in a booster seat, a child is typically buckled into a forward-facing child restraint system, also referred to as a harness seat. Practically all harness seats incorporate a five-point harness with straps that secure at the shoulders, across the upper thighs, and between the passenger's legs, similar to the harness used by race car drivers. Harness seats are typically attached to a motor vehicle through an upper tether and either internal latches or the vehicle's lap and shoulder belt system.

Many booster seat companies put children at risk by marketing their seats as equally safe and appropriate as harnessed seats, even for those children who weigh as little as 30 pounds and are as young as three years old.  That marketing directly contradicts the safe practice recommendations of both NHTSA and the AAP. Both NHTSA and the AAP recommend that children three to seven years old be kept in a harnessed seat until they reach the top height or weight limit allowed by the seat's manufacturer.  They further recommend that only after a child outgrows his or her harness seat should that child be transferred to a booster seat.  As stated by the AAP, "[t]here is a safety advantage for young children to remain in a [harness seat] for as long as possible before transitioning to booster seats.” As booster companies continue to market their seats against these safe practice recommendations, in an effort to capture a larger share of the market, children who would otherwise be kept in harness seats are being moved into booster seats prematurely, and being put at risk for enhanced injuries in an accident.

Before reaching the market, a booster seat is tested for compliance with Federal Motor Vehicle Safety Statute 213 ("FMVSS 213"), but compliance does not preclude a claim. FMVSS 213 is an imperfect standard for booster seats. It was first codified in 1971 and intended for harness seats, not booster seats. In 1981, dynamic safety testing standards were added, but again, they were developed for harness seats, not booster seats. It was not until 1994 that booster seats were added to FMVSS 213. Boosters are tested for compliance with the largely unchanged 1981 harness seat standards. Even worse, no specific standard in FMVSS 213 tests the design intent of a booster seat, i.e., to ensure that a vehicle's lap and shoulder belt is in the correct position. Booster seat companies recognize this, yet over thirty years later have not developed their own testing standards to help better ensure their seats are safe.

FMVSS 213 leaves it up to the booster seat companies to determine what minimum weight is safe for their seats, but mandates that booster seats cannot be sold to children that weigh less than 30 pounds.  FMVSS 213 testing is performed with the Hybrid III 3-year-old dummy. The testing weight for that dummy is 36 pounds. To capture larger sales, booster seat companies simply market and sell their boosters at the 30-pound minimum, pointing to their FMVSS 213 compliance testing with a 36-pound dummy as justification. Parents are unaware that the companies do not test and therefore do not know the safety performance of these seats for children who weigh 30 to 35 pounds.

The Truth About Side Impact Marketing

Up until the early 2000s, the vast majority of harness seats were not manufactured to accommodate a child who weighed more than 40 pounds. But progress has been made and with the harness seat latch tether system, children can stay safely in a harness seat much longer, with some seats handling weights upwards of 65 to 80 pounds. Recently, some states have enacted laws that codified AAP’s and NHTSA’s recommendations. For instance, Alabama, Connecticut, Ohio, Oregon, and New Jersey mandate that harness seats be used for smaller children and arguably make it illegal to use booster seats for kids who weigh less than 40 pounds. And in some foreign countries, such as Canada, the same companies who market their booster seats in the U.S. as safe for children that weigh as little as 30 pounds cannot legally sell those identical seats for children who weigh less than 40 pounds. 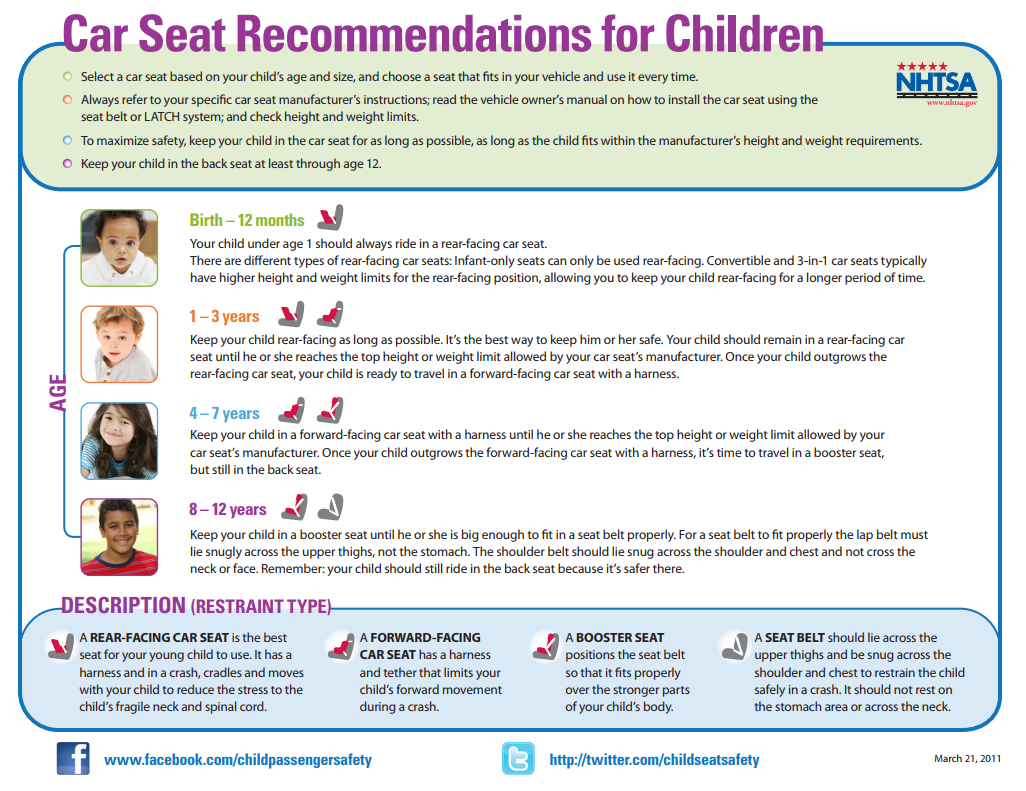 What can be done?

Booster seat companies should not be allowed to market their seats against the best practice recommendations of NHTSA, AAP, or many state laws. In an effort to boost their profits, they are needlessly putting children at risk. Only by holding these companies accountable will the practice end. If you or a loved one has been injured while being transported in a booster seat or child seat please contact Theodore J. Leopold or Leslie M. Kroeger at 561-515-1400 for a free case evaluation.

If you or a loved one has been injured in or died due to an accident involving a car seat, please contact one of our lawyers listed below. We represent clients across the country in state and federal courts. We would be happy to discuss your accident for the purpose of potential representation.