Plaintiffs allege that, beginning at least as early as July 1, 2003, (i) Defendants conspired to price fix Plaintiffs’ intermodal contracts in violation of Section 1 of the Sherman Act, including by fixing rail freight fuel surcharges (“FSCs”) and (ii) through the use of multi-year contracts, Defendants continued to reap the benefits of their anticompetitive scheme (in the form supra-competitive FSCs) for years after Defendants’ collusion-tainted contracts were negotiated.

Plaintiffs allege that starting at least as early as 2003, Defendants engaged in an extraordinary series of meetings, phone calls, and email communications through which they embarked on a conspiracy—under the guise of a fuel cost recovery program—to apply and enforce rail fuel surcharges across their customers in order to generate profits.

Specifically, Plaintiffs allege that Defendants used FSCs as a means to impose across-the-board rate increases on rail freight shipments, a result that would have been prohibitively difficult to achieve on a contract-by-contract basis. Throughout the conspiracy, and despite customer pushback, each of the conspiring railroads staunchly maintained its FSC program, pocketing billions of dollars in profits as a result.

Prior to conspiring, Defendants operated as businesses should: they actively competed against each other over rates generally and with respect to fuel recovery mechanisms to the benefit of their customers. According to a historical study of rail rates undertaken by the Surface Transportation Board, “inflation-adjusted rail rates declined in every year but one from 1985 through 2004.” Defendants were aware of, and concerned about, this trend.

Between 2000 and 2003, Defendants independently tried to implement revenue-enhancing policies, including uncoordinated efforts to impose stand-alone FSCs. These efforts failed.

Rather than continuing to compete with one another, Plaintiffs allege that starting at least as early as March 2003, senior executives at the highest levels of CSX, UP, BNSF, and NS began meeting and coordinating FSC formulas and programs. Once the conspiracy was underway, they no longer had to fear customer loss as their imposition of these rate-based FSCs industry-wide meant that customers had no leverage to threaten taking business elsewhere.

Instead of undercutting their competitors to gain market share and maximize their economic interests, Plaintiffs allege that Defendants conspired to assess similar FSCs, and to minimize waivers and discounts, to their entire customer bases applied across all rail freight traffic, including carload traffic (i.e., shipments that travel from origin to destination only by railcars) and intermodal traffic (i.e., shipments that travel by rail and one other mode of transportation such as truck or ship). The conspiring Defendants’ senior executives and chief marketing officers oversaw their railroads’ carload and intermodal traffic alike and sought to apply FSCs to them broadly. The junior executives overseeing the carload and intermodal traffic also attended and participated in the meetings.

Defendants worked tirelessly to achieve 100% FSC coverage across their customers. All four Defendants pursued 100% participation goals and tracked their progress toward attaining that goal. Defendants also policed the conspiracy by exchanging FSC coverage data with one another. In addition, Defendants started their negotiations using the standard FSC formula, meaning that any deviations from that standard FSC application still resulted in supracompetitive all-in rates for shippers.

Directly undermining the pretense that the FSCs were genuine fuel cost recovery mechanisms, as oil prices skyrocketed from approximately $40 to $150 per barrel during the Relevant Period, so did Defendants’ profits. A Senate Commerce committee report concluded that a “review of the largest four railroads’ [SEC] filings shows just how profitable the large rail companies have become over the last decade,” and included the following chart documenting the significant growth in profits during the Relevant Period: 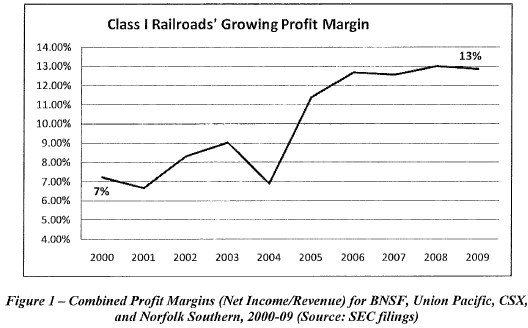 An independent 2007 study commissioned by the American Chemistry Council and Consumers United for Rail Equity similarly found that the difference between Defendants’ FSC revenue and their publicly reported actual fuel costs during the period from 2003 through the First Quarter of 2007 came to over $6 billion.

The individual cases are named: